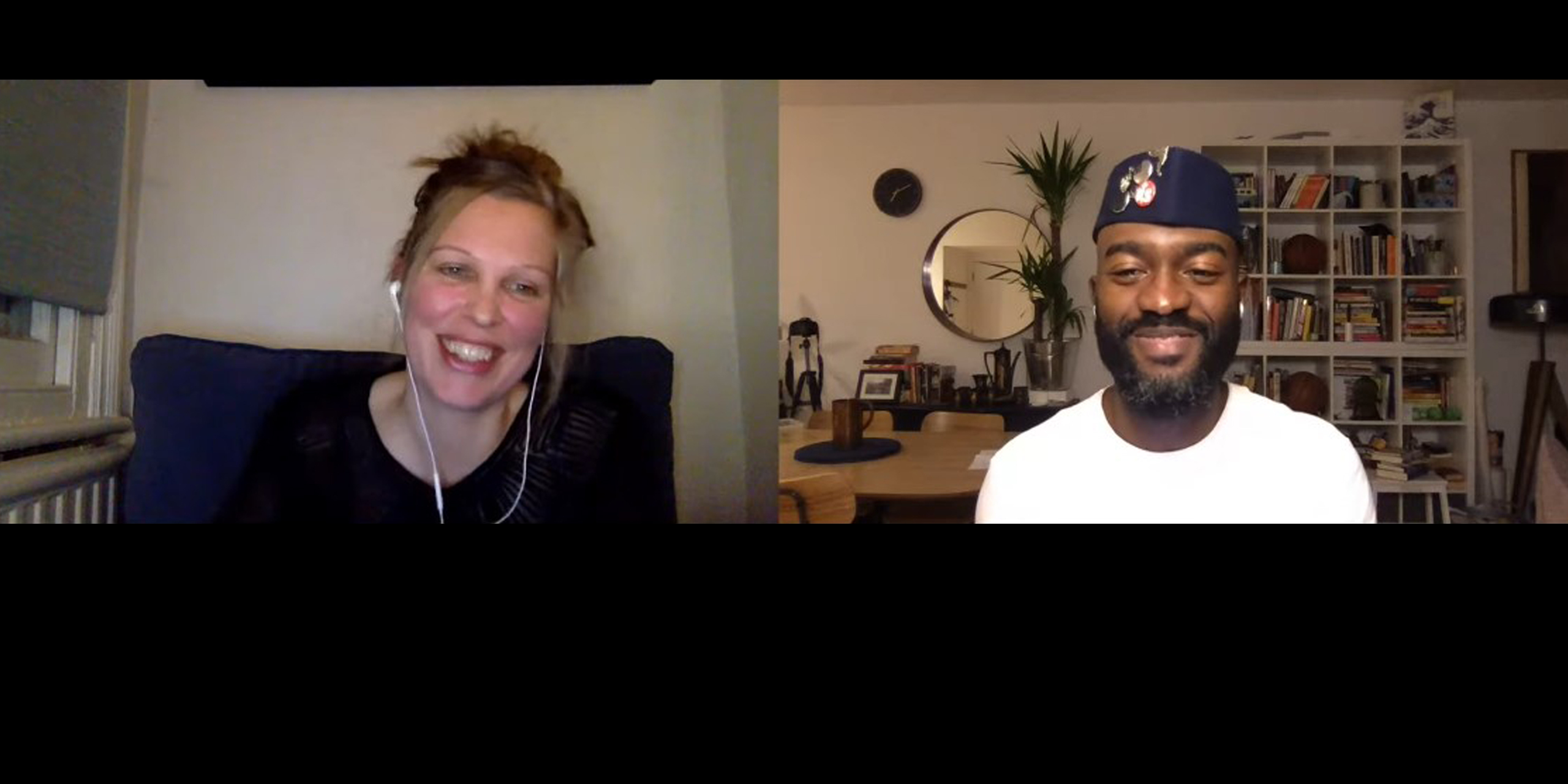 It was an absolute pleasure to listen to Inua Ellams in conversation with Alison Winch, reading from his poetry collection ‘The Actual’. Born in Nigeria, he is an internationally renowned poet, playwright and performer. His work deals with broad-ranging themes from racial politics, displacement and colonial legacy to family, tenderness, and intimacy. He provided insights into his creative concerns, creative practice and what inspires and drives his poetry. His warm presence radiated through the computer screen, hooking readers in from the beginning.

To welcome audience participation, Ellams invited audience members to choose words which would inspire his readings. In response to ‘Destiny’, he chose to read ‘Fuck Boko Haram’, a poem that investigates the extremist propaganda used to justify the heinous deeds of violence that plague Northern Nigeria. The poem centres the cyclicality of violence that spirals and engenders the hellish conditions that entrap young men in Northern Nigeria. These cycles of violence are colonial residue, direct consequences of colonialism’s separatist agenda. Having an unapologetic discussion on the real consequences of colonialism in today’s world shatters the assumption that ‘postcolonial’ underpins: that society is somehow ‘post’, or past colonialism, relegating it to an isolated time-period and in doing so, ignoring the neocolonial forces that contribute towards structural and systemic violence. Ellams’ line, ‘There were never enough schools to teach / the possible rift in thought and action’ highlights the stark difference between theoretical constructs and insidious reality. Another of his poems, ‘Fuck/Empire’ was commissioned by the Manchester Literature Festival and Museum of Manchester in response to a sacred royal ceremonial tusk taken from the Kingdom of Benin in 1897. He also pointed out how it is illegal to return items retrieved during colonial times. Ellams’ commitment to holding first-world powers accountable using his creative work as an instrument of protest was something that inspired me. Protest does not have to be a loud demonstration but can also take the form of woven narratives in the pages of a book.

Ellams also discussed how often he is asked why he creates such politically engaged work. ‘I was born into a story that began before I was born, before my father was born’ he stated, highlighting the intergenerational trauma inherited due to the legacies of colonisation. Brexit only heightened this sectarian and imperial divisiveness and intensified the isolation felt by immigrants trying to belong to a country. Often creatives-of-colour are stereotyped as favouring politically charged work over ‘easy’ poems and are consequently sidelined. Ellams addressed how it is not a matter of choice, but more an articulation of existence, a cry of survival. Ellams did not write to be rebellious, his book stemmed from the cry of constantly being scrutinized as the ‘other’, constantly viewed through varying lens shaped by sectarian divisiveness and the imperial gaze. The heat from that scrutiny gave birth to the book. As someone who constantly feels existentially scrutinized, pressured into fitting the mold of the ‘good immigrant’, Ellams words resonated with me. Constantly being gaslit into believing that such a dialed-up scrutiny does not exist in a ‘colour-blind’ society invalidates microaggressions people-of-colour experience on a daily basis. One of the highlights of this event was the honest, safe space where these urgent matters, often swept under the rug, were aired, and candidly discussed. Ellams stressed on the power of language to articulate the experience of constantly being under such a magnifying glass.

Ellams also tackled the topic of toxic masculinity within communities at large, but specifically also his own. ‘What changes need to be made? What are other ways of being?’ are some of the questions ‘Fuck/Boys’ asks. Ellams discussed how toxic masculinity is a bequeathed poison, laced with misogyny, homophobia and violence. He spoke on how younger generations of men need to stop considering their forefathers as the mold they need to grow into, but to become whoever it is their instincts drive them towards becoming. ‘Men need to create spaces for sons to be who they want to be,’ Ellams added, extending the discussion on how relinquishing some of their power is one way to create a more just, balanced world. Encouraging men to articulate themselves free of gender expectations can be transformative, enabling communities to uphold and champion intersectional identities. In a time when gendered and queerphobic violence is on the rise, and the rights of women and LGBTQIA+ people are being threatened, conversations like these become paramount.

‘Fuck/Love’ complemented this discussion by exploring linguistic failures of emotional expression. An aching poem that searches for the vocabulary to articulate ‘ancient aching acres’ of emotion, the poem encapsulates how the English word for ‘love’ is often saddled with a romantic meaning and is therefore a word hesitantly deployed in specific circumstances. ‘What is / to love / when all your meanings are ineffable sufferings’ deftly captures the agony of being tongue-tied due to a heavily codified language with coagulated meanings. Ellams talked about how men often clam up because they do not want to be misunderstood when they say they ‘love’ each other. He talked about how it is ‘heavy knowing the potential ways you can be but powerless to be all of those things’ highlighting how language has both, the power to enable agency through utterance or propagate erasure through silence.

Being bilingual myself, I connected with how sometimes there are emotions and affects that slip in the gaps between translation. I particularly enjoyed Ellam’s conversation on linguistic rupture: the creative potential as well as the ethical responsibility in writing for multiple communities and the dangers of taking language for granted. Ellams discussed this further during the Q&A’s that welcomed questions from the audience. He talked about how he comes from a country with five-hundred languages and dialects and consequently, he is conscious of how a Nigerian audience might not have access to Ellams’ UK dialect. The multiplicity of understandings that then inform a poem, not just English speakers but speakers of varying English dialects become a strong editing premise. Ellams discussed the dangers of not taking these considerations into account. He narrated the story of how a sloppy translation of ‘miracle healing’ as ‘healing without medicine’ from the Bible to an ailing man caused him to refuse treatment. Awareness around the politics of language and the ethical responsibility to interrogate an assumed universality of readership that is privileged, and Anglophone is something every creative must be conscious of.

The audience questions also prompted some fascinating insights into Ellams’ creative process. He shared that some of the best advice he received as a writer was from Stephen King: ‘Write with the door closed, rewrite with the door open.’ He encouraged creatives to free-write in a safe space and pour yourself onto the page. When rewriting, pretend a stranger sits beside you. Being conscious of how the poem is received by an audience is a great way to initiate the editing process. When asked if he writes with an audience in mind, Ellams spoke about writing for ‘an audience of the world’ and his belief in democratisation of creative work. If he fails to articulate a story well, he has faith that his audience will take the story and relay it better, all griots in their own right. Hearing poetry being knocked off the elitist pedestal and presented as accessible with roots in oral storytelling was hugely encouraging for me as a spoken-word poet who constantly grapples with the dichotomy of ‘page’ and ‘stage’ writing.

When asked about the polemic nature of his titles which often surprisingly led into intricate, nuanced thematic explorations in his work, Ellams commented on how he wanted to challenge readers by presenting the stereotype of the ‘angry black man’ before subverting it through creative control. Thus, readers are confronted with their own complicity in consciously or unconsciously upholding these tropes by redirecting their expectations. Ellams advised that anger is a great spark to the creative process, but creatives need to find the courage to turn into a productive force that questions what motivates humanity. His intricately woven poems that are in conversation with each other are part of a conscious effort to answer this question within a constructed creative universe. Ellams expanded on how he creates ‘ecostructures’ that underpin his poetic universe, similar to Marvel’s cinematic universe. Each piece of creative work is in careful conversation with, and the foundation for other writing. This is what makes Ellams’ poems so electric and pulsing with energy, they are speaking towards or speaking back within an intricate cartography.

To end this feature article, I will expand on how Ellam’s tackles creative block during lockdown. Inspired and driven by movement as a method of dynamic cognitive processing of the world around us, Ellams also founded the Midnight Run, a nocturnal urban excursion that reveals the city in a new light. There is also a lot of ‘movement’ in the collection, both thematic movements and physical journeys that speakers undertake. When all movement was restricted during lockdown, I felt emotionally and creatively blocked, unable to stimulate my imagination to envision creative scenarios. Ellams talked about how he ‘moved away’ by researching a forthcoming play set in pre-colonial Nigeria that explores the structures of matriarchy that existed before capitalism and patriarchal socialization. Reconstructing a world he was not a direct witness to helped to stimulate his imagination.

This feature is only a snapshot into the wealth of topics Ellams’ covers in his work. The collection encompasses fury to tenderness and everything in between. As a creative who struggles to thematically diversify my work, reading and hearing how Ellams tackles varying themes from police brutality and immigration control to environmental concerns and romantic intimacy with assured skill was truly an inspiration. I encourage you to watch the conversation on UEA Live to engage more thoroughly with Ellams’ poetry as well as his creative process.