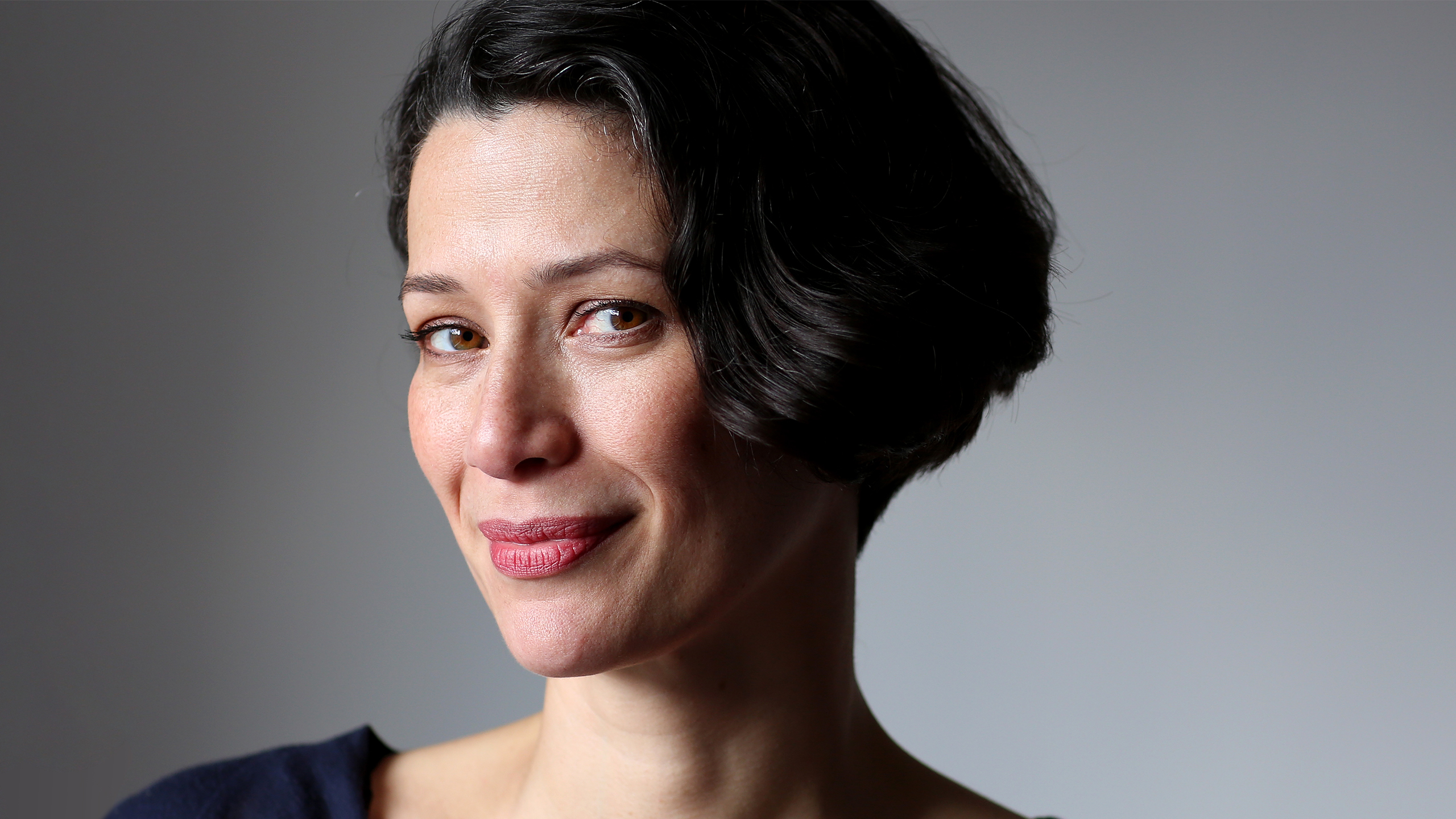 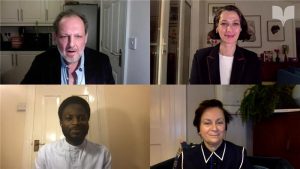 It became clear to me as Foden introduced himself and the panel that UEA and the Booker Prize Foundation share some close links. Anne Enright was one of the earlier students on the Creative Writing MA at UEA, graduating in 1987, and Giles Foden himself was on the panel of judges for the Booker Prize of 2015. I could not help but feel proud of how the staff and students of my university provide such valuable contributions to the national and international literary scene.

The discussion began with Enright reading an evocative passage from her 2020 novel Actress. We were given some valuable insights into the development of Katherine O’Dell, the actress. Enright explained how the novel confronts the sense of meaning and purpose an individual can find in their art, and how this can often become overwhelming and allow us to lose track of who we really are. The novel traces the life of the Irish star of stage and screen Katherine O’Dell. We watch her rise to fame through the eyes of Norah, the actress’ daughter, and the relationship between mother and daughter is brought into question throughout the novel. This brief discussion made me think about what it must be like to be related to a celebrity. The character development of Norah, who grows from Katherine’s child into becoming a mother herself, inspired me to consider the transition from child to parent, and the complex and important relationships within a family network. 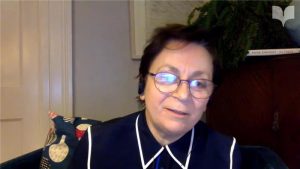 As Foden went on to ask Enright about her experience at UEA, I was fascinated to learn how the practice of studying creative writing has changed over the past couple of decades. Talking about finding her feet as a writer at UEA, Enright explained that she was part of just a single class of nine people: “nobody had heard of it.” The description of her time at UEA which followed was very enlightening Enright claims she “learnt how to fail at UEA,” and described being taught by Angela Carter and how it influenced her own teaching methods where she is currently based in University College Dublin. “She just waved her hand over the page and said ‘well this is all fine’.” She explained how writers who had preceded her at Trinity College had gone on to study at UEA, and that at the time there were only two creative writing courses in Britain, one at Lancaster and one at UEA. And finally, she admitted that a large part of the decision-making process was made for her when she found out she had won a scholarship to come and study at UEA. I found it intriguing to consider the origins of the study of creative writing, and realised it was important to remember that, in comparison to many other subjects, the study of creative writing at degree level is still a pioneering concept. 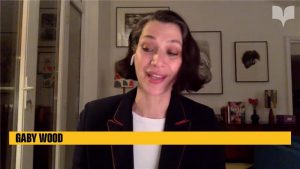 Gaby Wood joined the conversation and we began to learn about Enright’s experience of winning the Booker Prize. The pair discussed how a writer’s life changes after being awarded a prize. We had the privilege of being presented with two different perspectives, as Enright expressed her discomfort at feeling the need to write for an audience due to the popularity gained by winning the prize. “Your first idea as a writer is not the ‘crowd’, that is, the reader, but of the page.” She continued to explain that, to her, novels are singular: “they happen inside the mind of one reader at a time.” This quote stuck with me and really made me consider who I write for, and why we write. Wood inspired further thought when she described how winning a prize such as the Booker can be used as a way to create a public figure out of a writer, something that can be done in aid of a specific creative or political movement. Not only this, but she continued to describe the importance of building strong relationships with publishers. It became clear to me that prizes, although somewhat irrelevant when looking at literature through an artistic lens, can be extremely influential in elevating a writer to a level where they can easily make strong connections with publishers not merely in the UK but internationally.

Wood and Enright closed off this strand of the discussion by agreeing with one another. “Success can kill a writer quite quickly, but failure can kill them very slowly indeed” remarked Enright. And Wood acknowledged that “books have a heartbeat that is not the prize that rewards them.” I found this discussion particularly fascinating, and it really made me consider the multifaceted importance of prizes and awards in art and literature. Buoro, a writer with a long future ahead and little current fame agreed that the publicity gained by authors after winning an award is essential for new writers to break onto the scene. 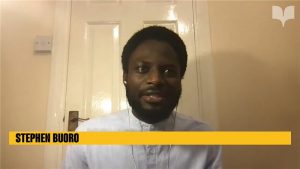 I was excited to hear what this aspiring novelist had to say about his soon to be published work, The Five Sorrowful Mysteries of Andy Africa. Foden prompted him to talk about the roles of animism and Afrofuturism in his novel. I found it enlightening to hear Buoro explain how these philosophical concepts had always interested him in his writing. It wasn’t until he created the character of Andy that he could find a way to bring all these ideas into focus. “The character opened up many different opportunities for intertextuality.” He goes on to explain how his character is constantly learning, ever curious about the world around him, and this allows him to confront different world perspectives on African culture. As Andy begins to explore a Eurocentric, western view of Africa, Buoro can bring into question where we form our beliefs and why. “The book examines the whole sphere of Andy’s existence and beliefs.”

His philosophical words made me consider how for centuries philosophy has been a subject not only reserved for Europeans, but also the elite. I am very curious to see what Andy Africa has to say as he enters discourses which were founded in a culture alien to his own and must forge his own path of philosophical self-discovery. After Foden prompted Buoro to talk about the role of maths in the novel, I was reminded that the writer studied Mathematics before coming to UEA for the Creative Writing MA. Buoro explains that “maths is what you can do on paper, philosophy picks it up and takes it further.” The path to knowledge for Andy lies in making the step from mathematical logic to more conceptual and abstract thought. I cannot wait for this novel to be published so we can all get to meet Andy Africa!

At the end of the talk, Foden selected questions from the audience. Buoro was asked to elaborate on the importance of art and maths in expanding our understanding of our surroundings. He answered that it is essential to harmonise the two. While maths can give us the axioms and proofs needed to base our thinking, there are many questions that maths cannot answer. “Art and science may have to work together to provide answers about the universe.”

The questions then turned to Gaby Wood for her insight into the world of literature prizes, their role and controversy. “It’s not the be all and end all, but it’s a snapshot. It’s like asking a different photographer to take a photo of the same subject. Each different award gives a different perspective,” a helpful analogy to explain the need for multiple awards. She went on to explain the newly launched International Booker Prize, which is open to anyone writing in English. She talked about how important it is to award an international prize, firstly because it allows for a global view in literature and the possibility of seeing the world through a different lens, and secondly because “we can bring many more people into the reading fold,” and a broader range of writers means a broader range of readers.

This idea felt to me like a fitting one to end on, and Giles Foden must have agreed, as he emphasised the importance of broadening our array of sources and allowing more international writers onto the stage, before thanking the audience and bringing the talk to a close. The chat box began to explode with thanks and praise, with viewers calling it a “wonderful event” and a “fascinating conversation.” Overall, I thoroughly enjoyed the way the panel blended a mix of perspectives into a truly educational and inspiring discussion. I have enjoyed the UEA live events in the past, and this one certainly did not disappoint! I look forward to the events of the coming weeks.